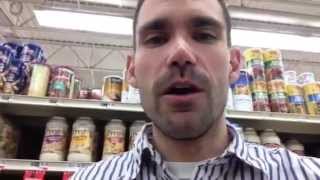 Why are bread crumbs unhealthy?

Bread crumbs seem pretty harmless, they’re just tasty pieces of bread to give your meal a better look, texture or taste. One would think that bread crumb ingredients are pretty simple and straight forward and resemble bread ingredients. A closer look however reveals several concerns. I think video health tip, Tony takes you into the grocery store to explain the harmful ingredients you should look out for when you’re shopping for bread crumbs.

High fructose corn syrup is a sweetener which several studies have shown has addictive characteristics. A 2008 Study from Princeton University shows that lab rats have withdrawal symptoms when th ey go from eating high fructose corn syrup and suddenly stop. This explains why many consumers report headaches when they first go on a “clean” diet and take chemicals like this out of their diet. Despite these concerns, the Food and Drug Administration continues to allow companies to use as much of this chemical in food as they want. Thanks government!

Now, wait a second. I’m actually a fan of honey in its raw and pure form. But what you see on food labels as “honey” is often not real. Companies, understandably so, want to maximize profit so they’re using the cheapest ingredients possible. Unfortunately, there are bad players in the food industry who are wholesale selling these manufacturers fake honey that, when tested, reveals it’s just syrup and there is no bee pollen in it. This fact has been well documented in the Netflix documentary “Rotten.”

The fact that there are often two sweeteners in a product that is not even known for being sweet, makes most bread crumbs in the grocery store a hard pass. Consider making your own breadcrumbs at home or swapping them out of your recipe for cashews (with no added oil) blended in a food processor.