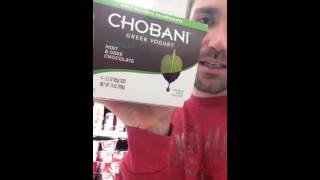 Shopping for yogurt, and what’s carrageenan?

In this video health tip, Tony is back in the grocery store looking at one of America’s favorite “healthy” snacks – yogurt. Tony explains that there’s three main questions to ask when looking at a yogurt label:

Before we dive in though, check out this awesome research from the Cornucopia Institute which breaks down a “scorecard” of the healthiest yogurts based on sweeteners, organic ingredients, artificial ingredients, and if they use live probiotic cultures. Probiotics are beneficial bacteria that are absolutely crucial for gut health. Click here to learn more about the specific probiotic supplement that Tony takes every day.

Emulsifiers are simply chemicals used to help oil and water mix together, because they don’t do so naturally. One emulsifier to keep an eye out for is “carrageenan” – you’ll also see it other places often associated with dairy, such as frozen cheese ingredients on pizzas, or cottage cheese and nut milks. Even many organic companies (organic valley, 365 whole foods, and horizon) use this it. Carrageenan is also often on products labeled, “All Natural” because there is no legal definition of the term “all natural” and companies exploit this loophole. When these companies are asked (I’ve called many on the phone) why they’re using a man-made chemical in a product labeled, “All Natural” they say carrageenan is natural because it’s made from seaweed. This is technically true, but it’s like saying High Fructose Corn Syrup is natural because it comes from corn. Carrageenan has been highly processed and refined and turned into a product which studies suggest can increase inflammation and aggravate (maybe cause?) conditions like Irritable Bowel Syndrome, Ulcerative Colitis, and diabetes.

A 2017 randomized, double-blind, placebo-controlled, multicenter, clinical trial was conducted to see if patients recovering from ulcerative colitis had a longer interval to relapse if they followed a diet with no carrageenan. It found…

“…patients who received carrageenan-containing capsules relapsed, and none of the patients who received placebo-containing capsules relapsed (p = 0.046, log-rank test). Laboratory tests showed increases in Interleukin-6 (p = 0.02, paired t-test, two-tailed) and fecal calprotectin (p = 0.06; paired t-test, two-tailed) between the beginning and the end of study participation in the carrageenan-exposed group, but not in the placebo-group.” – 2017 randomized, double-blind, placebo-controlled, multicenter, clinical trial

Fecal calprotectin and Interleukin-6 levels tells doctors if there is inflammation or not. This is used to diagnose conditions such as ulcerative colitis, chron’s disease, or Irritable Bowel Syndrome. I’m not a doctor, so legally I can’t recommend you do something to cure your disease, but when randomized, double-blind, placebo-controlled, muilticenter evidence suggests a food chemical is aggravating your exact medical condition, perhaps look for it on labels.

A 2011 study on mice who were given carrageenan in their drinking water showed:

and the same study concluded:

“Baseline insulin and insulin levels at 30 min after taking glucose during the GTT were significantly higher following carrageenan treatment. During the ITT, glucose levels declined by more than 80% in controls, but not in carrageenan-treated mice…….The results demonstrate extra-colonic manifestations of ingested carrageenan and suggest that carrageenan in the human diet may contribute to the development of diabetes.“

In 1972, the Food and Drug Administration considered putting restrictions on carrageenan and ultimately decided not to. In 2008 the FDA was petitioned to ban carrageenan and nearly five years later, they formally denied that request (Thanks, government!).