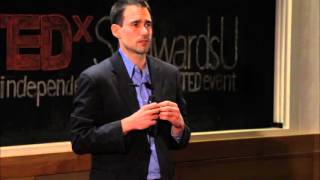 What do you know about the food you eat? Tony reveals the truth behind certain products, the importance of educating ourselves on the products we consume, and the health risks that can be involved with false nutrition facts. Tony Farmer is a food justice activist and health coach who motivates and inspires others to accomplish their health goals while educating them about nutrition, food labels and the food industry. Tony takes a holistic approach to wellness and specializes in decoding nutrition labels on food products. Tony has authored over 200 health tips and informational videos on his health website tonyshealthtips.com. This talk was given at a TEDx event hosted by St. Edward’s University in Austin, TX. The them of the conference was “The Lines We Create.”

Transcript: Imagine for a moment you’re at the airport and you’re standing in line ready to go through security you’re taking your shoes off and suddenly a man in front of you removes from his belt a loaded handgun and tries to get it through security. Now imagine that this man’s rationale for getting his handgun on your flight is,  “Yes I acknowledge this is a dangerous weapon that could cause a lot of panic, however I have no intention to use it that way, Mr. or Mrs. TSA agent, I just intend to use it as an ornament.

Now imagine that the TSA agent actually accepts that logic and lets this guy on your flight. I know this is somewhat of an unrealistic scenario, even here in Texas, but imagine for a moment that happened. What would that do to your trust in this government agency that should be here to protect you? And what would that do to your comfort level while you’re on this flight? I asked this question because this logic used in this example, which hopefully I think we can all agree is a bit absurd, this logic is the same logic that’s being used by large food companies to defend their misleading advertisements. And it’s the same logic that’s being accepted, not by the TSA, but by the FDA and other government organizations that should be protecting us. Case in point, about 10 months ago, I noticed a trend that was really disturbing to me. I noticed a chemical called partially hydrogenated oil a chemical, that according to the World Health Organisation, there may be links to cancer, according to the World Health Organization, there may be links to cardiovascular disease. This chemical which, without a doubt, is a known preservative, was in children’s products. Making matters worse, children’s products labeled no preservatives, even though it’s a preservative. How can this be? I was upset so I filed complaints with three different government organizations: the FDA the FTC and the state attorney general in the state of Minnesota where I lived at the time.

The response that I received back from the legal department of this large food company, I want to share with you. Tell me if it sounds familiar. Yes we acknowledge partially hydrogenated oil is a preservative and yeah we acknowledge that it’s in products labeled no preservatives. However, because we’re not using it as a preservative we’re using it as a flavor enhancer, we think that’s okay. It’s that sort of logic and that sort of philosophy where food companies seem to be putting their profit before our health. That’s the reason why I have to do what I do. The reason why I do whatever I can to hold these food companies accountable. It’s the reason that I try to keep these food companies honest because they’re clever. Let me tell you, food companies are really clever and their labels are also really clever.

Behind me you should see something that looks somewhat familiar, a Nutrition Facts label. It’s on many food products that we see in our grocery store shelves. The first thing I want you to notice is there are some lines around these nutrition facts. We’ve created lines, and we’ve separated the rest of the food label and gave this separate section to this this math: Fat calories, etc. and we call them Nutrition Facts. What’s the definition of a fact? One definition that I found is “something that is true rather than something that seems to be true” but as I’ll show here in a moment, I think that what’s inside this box is actually the opposite of a fact. Because there are many examples of something seeming to be healthy, based on those facts, when in fact it’s the opposite of healthy.

Behind me on your left you’ll see water. This is a label for water, no surprises, zeros across the board. No fat, no calories. On your right we have a specific kind of diet cola. Notice how similar they look. Now imagine you’re a patient and your doctor has told you that you need to lose weight as soon as possible, “or else.” If you’re only looking at the math and you’re not thinking outside of a box and you’re not looking outside of the box, you’re going to be led to believe that these two things are equally healthy for you. But when we look at the ingredients, we’re gonna see a very different story. For instance, in this particular diet cola products, we’re going to see something called phenylalanine and it’s in the form of a warning. Think about this for a moment, there’s literally a warning label on this diet cola and yet our attention is diverted, we’re almost mesmerized by these nutrition facts, by this math.

The next thing I want you to notice is a chemical called aspartame. According to the Food and Drug Administration this chemical has 92 reported side effects, one of which is weight gain, so if you’re that patient who your doctor is told you you have to lose weight and you’re reaching for this products so that you can lose weight, if you’re looking at the math rather than looking at the ingredients, you’re misled into getting something that could potentially be doing the opposite of what you’re intending. So again, I encourage you to look outside of these lines that we have created on these food labels and pay more attention to the ingredients. After all, the ingredients are the primary source of whether or not something is healthy. For the artists in the room, imagine if you took a picture and traced that picture. And then you trace the tracing of the picture. And then you trace the tracing of the tracing. Eventually you get left with something that is distorted. It’s something that is not as accurate as the original picture. With our food labels, we’re looking for that shortcut, we’re looking for that easy fix of whether or not something’s healthy and the nutrition facts seem to provide that because let’s be honest isn’t that a lot easier than looking at the ingredients and educating ourselves about what these ingredients are and what these ingredients do to our bodies? I think that’s exactly what we need to be doing, after all, some of these ingredients on food labels they didn’t exist decades ago. It’s very important that we educate ourselves and educate our children about what these ingredients do.

One more example that I want to share with you. It should look familiar on the left we have water once again on the right, before I show you the ingredients, what’s your guess as to what this is? Well if you’re just looking at the map it looks like salt water doesn’t it? All zeros just like the water except a little bit of sodium. That looks like salt water to me. This is a cranberry splash drink. Once again, we have the ingredients, you’re going to see aspartame again you’re gonna see phenylalanine again. You’re gonna see food dyes, you’re gonna see a host of chemicals that otherwise you would not have known about if you were just looking at the ingredients.

Before I leave you today, I really want to drive home the point on how important this issue is. Some of you may be thinking at the beginning, Tony you can’t compare guns to food chemicals. On the contrary, I think I can. We have cancer rates as high as they are, we have people dying of obesity and these products are marketed toward children. I think it is fair to compare them to deadly circumstances. I think that’s more than fair when someone is overweight, they’re more likely to have cancer, they are more likely to have high blood pressure, they’re more likely to have diabetes, they’re more likely to have high cholesterol. What if through the power of education and educating ourselves about these chemicals, what if we could impact all of those numbers? You know doctors like to say that the most important thing to a healthy lifestyle is diet and exercise. I disagree, it’s education. Without education, we may be dieting and exercising in the wrong way. So remember, when you’re in the grocery store and when you’re teaching your children, remember when you’re looking at food labels, “think outside the box.”